In a recent article featured in the Harvard Business Review, recognition was identified as one of the easiest things you can do to be considered a great boss. According to David Stuart:

“Most leaders receive surprisingly little development before assuming their first supervisory roles. In fact, many get no leadership training at all until they’ve been in the executive ranks for nearly a decade—reaching, on average, age 42.”

He goes on, “But whether you’ve had formal training or not, there’s one simple action that can dramatically increase any manager’s success in gaining the support and engagement of subordinates: recognize great work. That means calling out excellent accomplishments by your employees right away—and doing so in consistent and regular increments from the start.”

The studies he conducted found that:

“The data from it suggests a strong correlation between loyalty and acknowledgment. A 2014 study surveyed 2,415 employees in 10 countries and 7 languages. Among the 512 U.S. employees who say their company has strong recognition practices, 87% feel a strong relationship with their direct manager. “

“That number dips to 51% among those who reported a lack of such practices at their companies. Recognition’s frequency also plays a role. For those who say they receive some form of appreciation more than once a month, 82% describe a strong bond with their bosses. When that occurrence drops to less than once a month, only 63% feel those strong ties.”

In the 1980’s I ran a fairly large operating unit at a regional bank. I created a program for giving blue ribbons to co-workers. I called it the “Thanks I Needed That” Program. The criteria was fairly open ended. If someone did a particularly good piece of work, or helped handled a tough matter, you were encouraged to give out a ribbon. Every employee was given a supply of these ribbons. See photo. 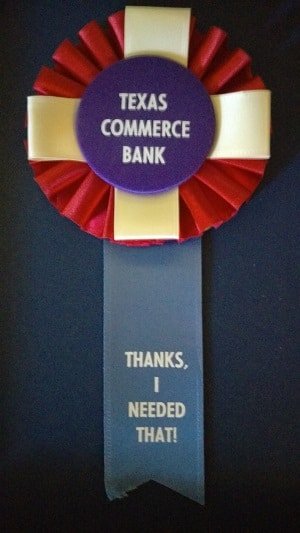 Soon the bank was full of these ribbons on cubicles and office walls everywhere. The morale took a noticeable step up. People were not only waiting on recognition from their bosses, but they were getting recognition from their peers. The program went official all over the bank, in 71 locations across the state.

It was a simple plan to implement. There was no need for governance. To my knowledge we never got a single HR complaint about the program or its fairness.

The truth is, people want to know when they have been recognized for doing good work. It shouldn’t have to wait for annual reviews.