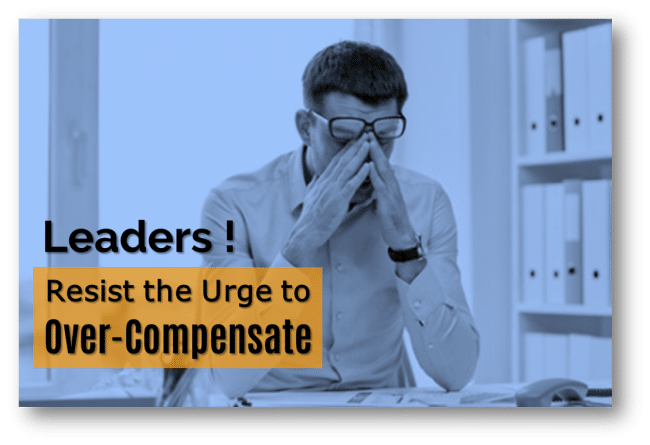 Managers and leaders frequently get caught over-compensating. You have an experience you don’t like. When the next situation arises that looks like the former, you choose to over-correct for past failures. It’s a common reality.

We see this phenomenon on a personal level. Your parents are charged with somehow failing you during your upbringing so you pledge never to do that again. When you have your own kids, you over-compensate. This is what has created the “hover parent” that universities and employers hate. Young people are going away to school with their parents right along side. Employers are reporting at alarming rates that parents are showing up for job interviews with their young adult children.

Why does this happen? Because we have a whole generation that felt abandoned by their parents. Whether the absence was caused by work or the military, children grew up feeling an absence from their parents. They grew up pledging to be sure their kids never felt alone like that.

It’s an over-correction. It happens in other ways too, especially for managers and executives. So what should you do?

The answer is return to center. Avoid the full swing to a 180 degree opposite reaction. Just move back to center. The move to a 180 is a natural reaction. If something turned out bad before, going in a completely opposite direction makes sense. But not so fast.

Going the full 180 can be a mistake. It can send you off in an equally wrong direction. The energy to go 180 can be draining.

Returning to center is a much wiser choice. Find the core value, the original vision, the central truth. Go there. Reconnecting with center helps you avoid over-compensating.

Getting back to center also has a bonus effect. You, as a leader, get credit for being consistent and reliable. Those are key attributes that people want to see from their leader.

When your actions swing in extremes, you lose points for consistency and reliability. Staying close to a center demonstrates a confidence in what your message says. Despite having to sometimes fail at an effort, the failure does not need to take you too far from center. Don’t over-compensate.