Yes, I spelled that right. One of the most powerful words is BUT. It has far reaching impact on several levels; most are not good.

Individuals who achieve the most in this life seldom give in to BUT; they stay off their BUT. 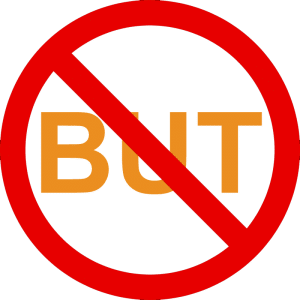 On a personal level, BUT gives us convenient excuses. Here are the popular ones:

Limiting thoughts are those incredibly negative ideas that may have seed in something an adult said to us when we were young. Or something your teachers said when you were in school. It might be something other people said to us as we grew older; the neighborhood bully or the guy at the corner store.

When we accept untruth like “you are too big”, “too small”, “too young”, “too old”, or “too anything” we embrace limiting belief. Then it manifests itself in our life by rational (actually irrational) talk like “I could try to make that happen, BUT I am too __________”. You fill in the blank.

Leaders must avoid BUT when talking to their team. Nothing is so disappointing to an employee as hearing “Yes, but…” or “I hear what you are saying, but…”

This single three letter word can pivot momentum and change course. When talking to your people, avoid saying BUT. Instead, phrase your response with a more inclusive idea like “AND”. You can say “I heard your idea, and I believe we should think about this too….”.

If you have a highly functioning team, you add to the trust by NOT cutting off ideas and discussions with BUT. If you are trying to build a team to function more effectively, try this subtle little tidbit (eliminating BUT) as you communicate with the team.

As you work into your new year goals, let them be aggressive and inspiring, no BUTS. If anything you have written about new year goals has a BUT with it, you don’t have a goal. You have an idea; an idea with no legs and no hope of being realized.