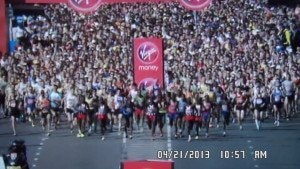 Today was very surreal. We are in London on the same day as the running of the 2013 London Marathon. If you have followed the news this past week, you are keenly aware of the horrific tragedy of the bombing at the finish line of the Boston Marathon on Monday, 4/15. Today, the entire city of London seemed to have turned out for the running of their marathon. There were over 35,000 runners and likely about 500,000 spectators. Normally crowds like that are daunting. But Susan and I strode headlong into the masses, not once thinking about the danger of or fear for a similar bombing attempt. I have to tell you it was empowering. 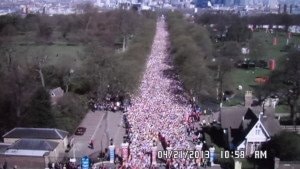 Earlier in the day the runners were led in a 30 second silent prayer for those killed or injured in Boston. Then the race was started. It was euphoric. These tens of thousands of dedicated souls snubbed their collective noses at malcontents everywhere who might try to perpetrate a fear campaign by staging a spineless and selfish act like a bombing. They banded together in solidarity with runners everywhere to demonstrate the strength of the human spirit to endure senseless acts of violence. They endured their own physical and mental challenge to press on to their finish lines, proving that just 6 days removed from a scary and tragic finish in Boston, there could be triumph once again. 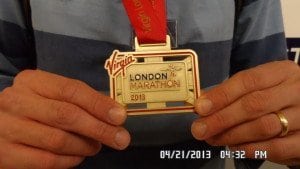 As my wife and I walked through the crowds, we congratulated every runner we saw. In some cases we stopped and chatted, mentioning we were from the States and we expressed our appreciation for their attempt to run the race today. All seemed moved when they fully heard the context of our congratulatory remarks. One must recall the Brits have their own 9/11 and Boston experience. It is called 7/7 here for July 7, 2005 when 4 suicide bombers attacked three trains and a bus in simultaneous bombings. They know the same swirl of emotion we have felt; sadness for the loss of life and the pain and suffering of those injured. Yet, just like the USA, they pulled together and resumed life without giving an inch to the terrorists cause.

In London today, we saw that same strong spirit rise to the call. It was wonderful! Thank you U.K. for a trip we will never forget.