This year’s U.S. Memorial Day occurs on Monday, May 29th. Memorial Day is a federal holiday in the United States for remembering the people who died while serving in the country’s armed forces. The holiday, which is currently observed every year on the last Monday of May, originated as Decoration Day after the American Civil War in 1868, when the Grand Army of the Republic, an organization of Union veterans founded in Decatur, Illinois, established it as a time for the nation to decorate the graves of the Union war dead with flowers. 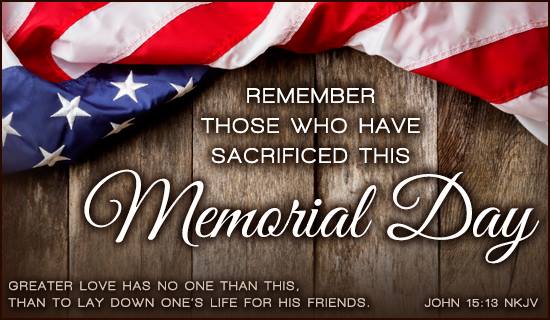 By the 20th century, competing Union and Confederate holiday traditions, celebrated on different days, had merged, and Memorial Day eventually extended to honor all Americans who died while in the military service. It marks the start of the unofficial summer vacation season, while Labor Day marks its end.

This publication never attempts to enter into political debate nor express political views. So the following remarks are not intended to be such commentary. However, having served as a U.S. Army officer myself, I have my own deep and personal beliefs about the significance of this day.

When a country sends young men and women away to fight a battle, one would think there is a true and greater good that is being served. We call them service members, giving service to their country. Seldom do they ask why, they just go because they believe in the country that is sending them; the ideals, the values, the principles, the core.

On one hand, I am encouraged today by the outpouring of heartfelt welcome when troops come home from the current battlefields of the world. They are welcomed in airports and on main street with hearty cheers, hugs, and applause. There was a time when we, as a country, didn’t do that for our soldiers. I am old enough to recall those days, but serve they did anyway. Another generation, long ago, followed orders, deployed, served, and sacrificed. I am glad we are past those days.

As to all service, sadly, some never come home to hear and feel the cheers. They come home silently if at all. There are nondescript receptions on the loading docks of some airport or shipyard. There is honor and solemnity. Those who gave the ultimate sacrifice will never know the honor we express on Memorial Day.

So this Monday, please take a moment to recognize the real truth of why we have this day. There are real families who have endured real loss. We should memorialize that.

Yes, there will be hot dogs and fireworks, sales at the malls, and family picnics. But somewhere nearby there will be a family who is seating one less place at the picnic table. Think for a moment about them. Offer a prayer.

Please focus your political rhetoric on things that have value. Things that cause young people to enlist and go to war to preserve those values, whatever you think they may be. Remember that many of them won’t come back home alive. They will have sacrificed so that you can have your heated debates with family, co—workers, neighbors, and elected representatives. Don’t let the discussion be futile for those who have served. Honor them each day, not just Memorial Day.

Thank you in advance for allowing me this brief departure from my usual content covering management and leadership. In a very small way, this is my service to you.

[reminder]Let me know your questions or ideas for other articles I can share for you.[/reminder]