The summer heat was blazing. Humidity was high and the temperature was higher. I was undaunted. At 17, I was working my first big-time job. Construction!

My best friend and I had landed a summer job working on a heavy construction crew. I learned a lot about building that summer. There was re-bar, pigtails, plywood frames, huge forms, and lots of sweat.

The work was brutal for a scrawny high school kid. But I was on top of the world. The foreman was a gruff, grizzled beast of a man who obviously took no grief from anyone.

He watched my friend and me with a kind of fatherly care. I guess I didn’t look at it that way then, but learned to appreciate it more as years went on. He was patient with showing us what needed to be done. We knew he was on a project deadline.

He had watched us work the first few days. Then one day I was trudging across the site carrying something somewhere. I was already hot and tired. Apparently I was not moving fast enough for his taste. He came up behind me, grabbed my shoulder and squeezed. It didn’t quite cripple me, but it was obvious he had a point to make.

He jerked me around and we were face to face. His eyes squinted and he glared.

“You better move with a purpose.”

At first I thought he wanted me to just look like I was busy. That made sense. But then I learned it meant much more. It was important to have this thing called purpose. Purpose gives focus. Focus gives energy. Energy gets things done.

I heard that coaching message a few years later in my military experience. Moving with a purpose was a way to keep from getting tagged for ‘extra’ duty. But it became a mantra.

Just like in construction, moving with a purpose now had a deeper meaning. I was learning how to survive in combat. When you need to move, you better MOVE!

I frequently find myself thinking about this simple coaching tip. ‘Move with a purpose.’

[shareable cite=”Henry David Thoreau”]It is not enough to be busy; so are the ants. The question is: what are we busy about? #purpose [/shareable] 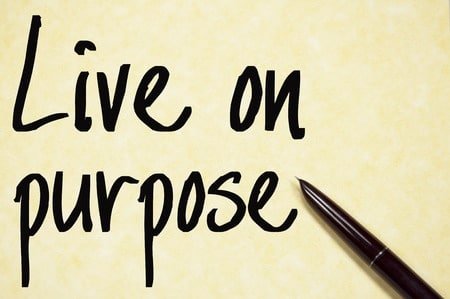 Finding one’s purpose is key to being able to plan and execute. More importantly, it gives meaning to all aspects of daily life.