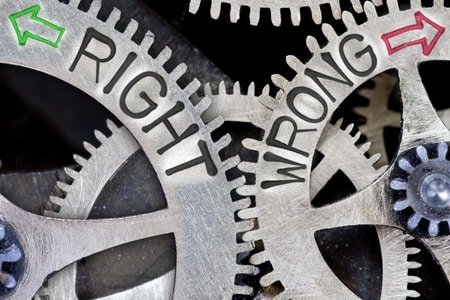 Problem resolution is a big deal at work, at home, and in your community. Usually there are two sides to whatever argument you may find; the proverbial “two sides to every coin”.

The problem with problem solving is that someone always thinks their side is the “right” answer, while the other side is “wrong”.

One of the best coaching tips I ever received from my mentors was: [shareable]“there doesn’t have to be a right or wrong, things are just different”[/shareable].

When you eliminate the adversarial aspect of right v. wrong, you open up the door for compromise and collaboration. If I declare your idea is just different, then maybe we can talk through the sticking points and come out on the other side with a clear solution.

In turn, if you agree to look at my idea as different without dismissing it or vehemently opposing it, then you too might be able to accept the idea.

Without a doubt there are, from time to time, core values that should not be compromised. But in the realm of the workplace, usually everyone is on board with the primary core values, or else they wouldn’t work there for long.

You get the picture. Fill in the blanks with your own most recent skirmish with a boss or co-worker.

How would it have looked if you first said, wait, there is no right or wrong here? Obviously we are thinking differently. How can we talk about this topic and see each other’s position before we simply start a fight over the outcome.

Again, taking absolute positions like right or wrong makes one party the winner and the other the loser. If the two of you have to endure a long term relationship, winning and losing isn’t the most productive way to build success as a team.

However, celebrating differences and using those to gain understanding can serve to grow a team’s chemistry. Not everyone’s ideas or beliefs can win out all the time. Yet time and time again, people on a work team will accept new direction as long as their own opinions were heard and respected. This is to say they were given a fair consideration before the decision was finalized.

Leaders should take a strong look at the way they deal with perceived conflicts with those who report to them. Differences in views can be administered with a more open look as “different” instead of stating right v. wrong.

The age-old dispute between management and employee is rooted in this right versus wrong mentality. Traditional perception is that management is always right and the employees are always wrong. What a horrible work environment.

More modern, servant based leadership is open to looking at the differences among the work team. As decisions need to be made, having an open dialogue about the problem and the potential solutions serves to eliminate the adversarial relationships that undermine teams.

Now, not every decision can be run through a process of getting inputs from all sides. A leader has to stand at the center of the matter and make the call. What can happen though is to see a dispute arise and deal with it using this “it’s not right or wrong, it’s just different” mindset.

Let me encourage you to try this the next time a co-worker, spouse, significant other or colleague raises an issue that feels like a conflict of opinion. Be the leader in the situation and call for consideration as “just different”, then see how it resolves.

I’m going to bet you will have a more peaceful and receptive party on the other side of the table.