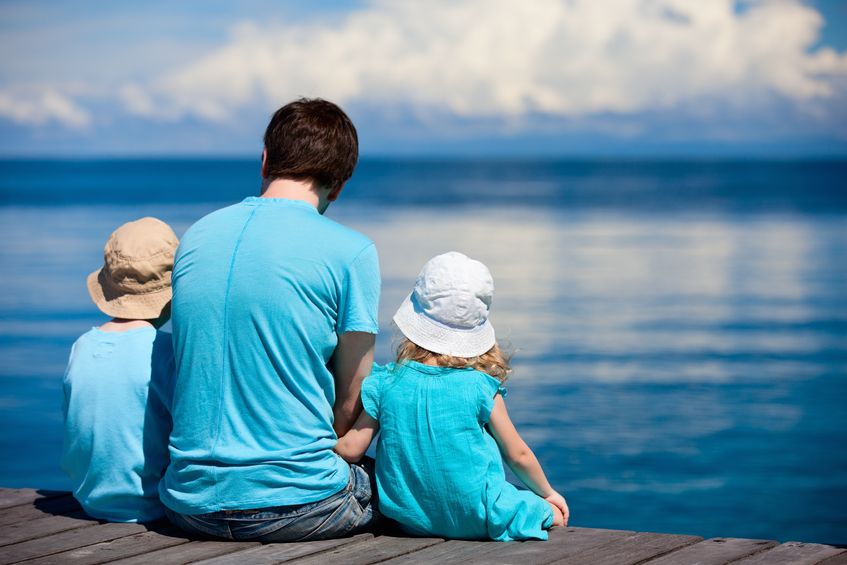 If you are already in a leadership position or want to be in one, you should reflect why? Are there certain skills you demonstrate? Have you always been in leadership? Or do you know you have potential that others may not yet recognize? 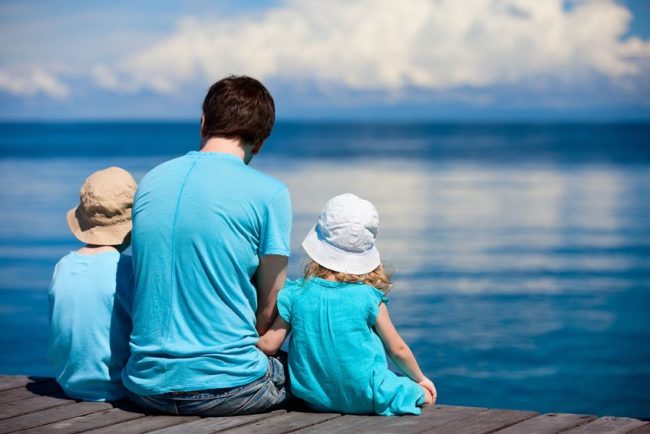 While our adult life and the effort to earn a reasonable wage both create opportunities to use leadership skills, there are core values that begin much earlier. Leadership begins at home.

Sunday, June 17th will be Father’s Day. The tradition started roughly around 100 years ago, but its exact origins are disputed. Some historians believe it began as an American movement.

But there are two different accounts as to who invented it and the reason behind it. Some believe the holiday was founded in Fairmont, West Virginia in 1908. A year and a half before, there was a mine explosion in a nearby town called Monongah. 360 men died, 200 of whom were fathers, who left behind widows and children.

A woman called Grace Golden Clayton was moved by this and went to visit her Pastor, Reverend Robert Thomas Webb. She suggested that there should be a special day dedicated to honoring fathers. Grace chose July 5, 1908, to celebrate the first Father’s Day, because it was the nearest date to her late father’s birthday.

Unfortunately, Grace’s Father’s Day was unsuccessful, as it was not promoted outside of the town, and more importantly, her town held a huge July 4, Independence Day festival which overshadowed her event.

Meanwhile, other historians believe a woman called Sonora Dodd from Washington invented the holiday instead. After hearing a sermon about Mother’s Day in 1910, Senora began to wonder why there wasn’t a day dedicated to fathers. Sonora and her siblings were raised by their father, following their mother’s death.

She wanted Father’s Day to be celebrated on June 5, her dad’s birthday, but the church felt they needed more time to prepare, so instead June 19 was chosen.

The United Kingdom’s celebration of Father’s Day is thought to have been inspired by the American version.

Our experience with our Fathers influence who and what we become. If you were blessed with a Dad who was your first mentor, you are very fortunate. Life lessons, coping skills, hobbies, crafts, sports, and other life-long behaviors are nurtured by loving, caring Dads.

Sadly, too many of us suffer from relationships with Fathers that leave much to be desired. Perhaps even physical or emotional wounds were created that take years to overcome.

If you were in the first category, congratulations. Hopefully, the teaching and encouragement provided by your Father helped shape and mold the leadership values you use today.

However, if you count yourself in the second group, you have work to do. Throughout my career, I have encountered professionals who had the bad home life. Interestingly, they do one of two things. Either they perpetuate the brutish behaviors and emotional abuses with co-workers and employees or they turn 180 to run in an opposite direction, vowing never to be “that guy”.

The ones wanting to improve and grow beyond their bad start often make amazing leaders. Why? Because they are open and receptive to the things that can shape them into much better people. If your heart is open to that, good leadership frequently follows.

I never knew my Dad. He died before my second birthday. Fortunately, my Mother had the wisdom and foresight to know I would need mentoring from men. She worked diligently to build a small but dedicated network of men in our community who were willing to take me under their wing. Over the years I watched these men model what they told me.

Jack was my Scout Master. From ages 9 to 12, he was my rock. He was there for everything a young boy ever wanted to ask. Then there was George who taught me woodworking. But the lessons in the shop were not limited to just the tools and the wood. There were life lessons like don’t try something important when you are angry. Don’t use the wrong tool for the job, you’ll break the tool, ruin the material, or hurt yourself. Closer to high school Dan came along. He showed me his business. He taught me about inventory, cash flow, and sales. Those lessons were often discussed on the tennis court or wading in a stream, catching fish.

The collection of influence I received helped me to realize natural gifts and talents I could use while I learned other things. Leadership started at an early age and has grown ever since.

It Begins at Home

Regardless of your position in life right now, if you are a parent, you have a big responsibility. I’m not talking about the obvious care, feeding, and safety of your kids. Instead, I am talking about creating an environment for learning, growth, decision making, and creating in your kids their own sense of responsibility to others.

Setting a moral compass with strong core values of right and wrong, service to others, and love of something much greater than yourself; those are principles that build strong leaders. Our country and the world need the next generation of leaders prepared and ready when they become the “next one up”. You can start now building that legacy for yourself, your family, and the community around you. YOU can make a difference. 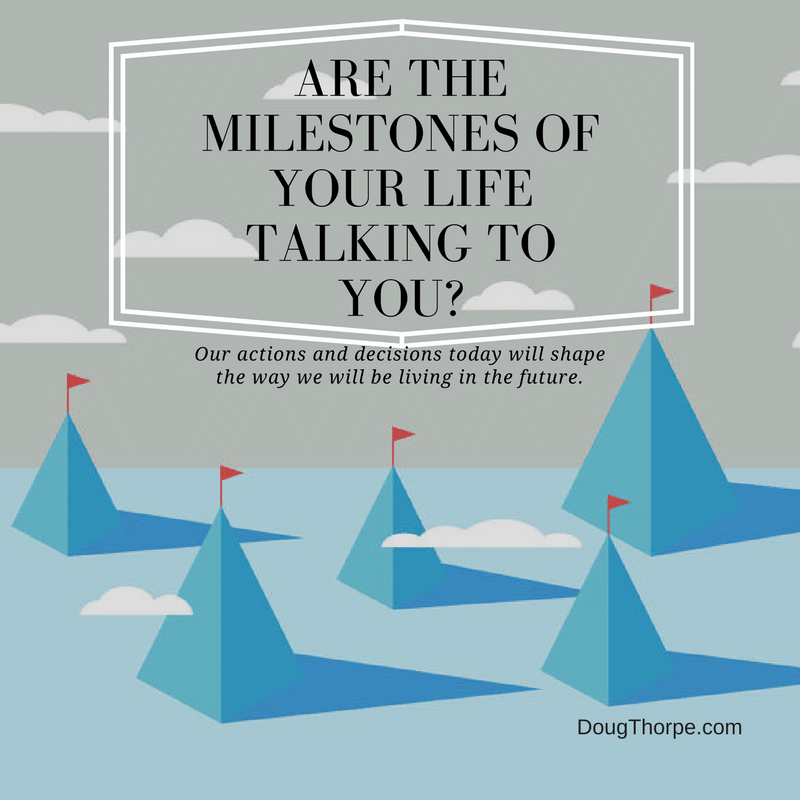 Have you ever stopped to think what the milestones in your life are telling you? Or do you even keep track of those moments? We all have decisions, outcomes, and experiences that shape and mold the person we become. Some call these defining moments.

Taking a look at the list of the key moments can be very helpful when trying to make new decisions about who we are and where we’re going.

I confess, this week one of those milestone moments happens for me. It’s my birthday and it’s a big one. I won’t bore you with the details. And, no, this is not a weak plug for attention, but instead an opportunity to share some thoughts with you.

Birthdays can be examples of some classic milestone moments; turning 16 to get a drivers license or 21 to be “legal” for drinking can be big deals. But then we start counting birthdays in fives; 25, 30, 35, etc.

A friend once shuddered at his 35th  birthday. In his mind, thirty-five was a serious pivot point in his life. Somehow everything was going to be downhill. Ironically, my father-in-law always said “no one pays attention to you until you turn 40”, but that’s another story.

There are many other examples of life-changing moments we experience that become milestones for us. Graduating from school, getting married, having children, getting a divorce, being transferred, making a big move, changing jobs, changing careers… all of these serve to set markers in our life from which we can see a picture start to form. There are many more.

Decisions are critical influencers of when, where and how some of these markers get created. Bad decisions send us down paths that either make us learn something, or keep us from learning. Better decisions build experience and wisdom. The older you get, the more you will see a picture unfolding. You see a shape and a pattern come to life.

If you are reading this and feeling stuck where you are, take a moment to recount the milestones in your own life. You might even take a notepad and draw the timeline of your life, placing markers at the various key moments. It doesn’t matter whether they are positive or negative, just draw the map.

From this drawing see what picture you find. Are there common themes that jump out? Is there a hobby or skill that keeps coming up? Is there a body of work that inspires you more than the others?

If you’ve never done an exercise like this, you might just find a new you in there somewhere.

Your time is limited, so don’t waste it living someone else’s life. Don’t be trapped by dogma — which is living with the results of other people’s thinking. Don’t let the noise of others’ opinions drown out your own inner voice. And most important, have the courage to follow your heart and intuition. They somehow already know what you truly want to become. Everything else is secondary.

Continuing our look at Robert McGee and “Search for Significance”, he speaks of the Biblical notion of the need to renew our mind. I have found this to be true in so many facets of life and business. As leaders in our business, our community and our families, we need to be ever-mindful of the significance our actions can have. But before we get to action, we usually have a process that starts with each and every situation that comes our way. Knowing the key elements of the action sequence can improve the outcome.

It starts with an understanding of this flow diagram of how we typically process our response to a situation.

Let’s talk about this spectrum.

1. Beliefs –  When a situation arises, we first filter it through a set of beliefs. I am not talking exclusively about any particular religious belief. Rather I mean a set of core values, understanding, and evaluation of things important to us or things we have assumed as drivers for who and what we are. Most of these beliefs have their roots in our early childhood development; life experiences including things were taught expressly or things we learned as outcomes to events. These experiences establish a set of core beliefs that have a strong influence in how we react to new situations in later years. Unfortunately, most of keep a portion of negative beliefs mixed in with the good things. e.g. I am not smart enough, strong enough, or pretty enough, etc.