The King of Leadership Fails

Executives, managers and entrepreneurs fail for many reasons, but there is one undisputed King of Fails; the Boss who cannot recognize the key talent on his/her own team.

Littered across the job change landscape are thousands of very sharp and gifted people who were basically ignored by their boss. These disheartened souls choose to find a new job, hoping the next boss will at least appreciate how hard they work and what they can do.

I have had my own experience producing quality work ($90 million worth) for a business owner who later professed “I don’t know what Doug can do.” OK, some may argue I failed to explain what I did for this guy. However, when the big paydays are coming in and he is attending a lot of the executive planning sessions around the project I was leading, you’d think he’d observe and figure a few things out, right? Not so much.

There is a whole body of thought for workers who feel their contributions are going unnoticed. I will save that discussion for another time.

Today I want to challenge managers and owners to take notice. Look at your best people. What do you do to keep them engaged, inspired, and loyal?

You’ll notice I said managers and owners. I didn’t say leaders. If you fail to effectively engage your best workers, you are not being a leader. You are merely hitting the numbers, pushing work, and banking the $$. If this is you, you have no scalable, sustainable business model. You will fail. It’s not a question of if, but when.

Your best workers need to be recognized both personally and corporately for their effort. They are not glory hounds nor are they some kind of needy basket cases. They just want to feel their work means something and is valued by the boss.

… my colleagues and I at SAP conducted a study with Oxford Economics across 27 countries to find out what the future workforce wants. We led twin studies of executives and employees and asked the employees how they were rated on their most recent performance appraisal rating. Of the 2,872 employees, their responses were spread with about 40% being high performers, 40% average, and about 20% below average.

A [big] contributing factor to job satisfaction was feedback: How often do your managers sit down with employees to discuss their performance? Chances are, not enough. Fifty percent of high performers say they expect at least a monthly sit down with their managers, but only 53% say their manager delivers on their feedback expectations. If you are relying on annual or semi-annual performance reviews as the primary feedback mechanism with your employees, your high performers are likely to need a more frequent boost and will begin to show signs of under-appreciation.

Within any work team is a bell curve of talent and motivation. If you are not familiar with bell curves, here’s what one looks like. 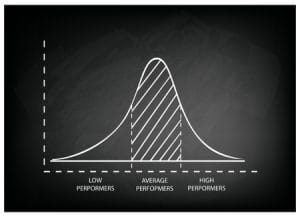 On each end you have outliers. In this case, one end is the lower producers/poor performers. The opposite end is the high achievers. In the middle (the bulge/bump in the curve) are the masses; the bulk of your team who do ok on a regular basis.

While you want to be pro-active in handling the development of the low end employees, you sometimes have to face the music and let them go because they are just not a fit for your organization.

The middle group gets things done and can be relied upon for routine production and performance.

The higher end population are the super stars; the ones who excel at what they do. These are the ones who are easy to forget. They give you comfort in what they can do, so you subconsciously don’t want to bother them; certainly not with micro managing. Ironically, giving these guys wide berth often makes them feel neglected or ignored.

The noblest intent of the manager to honor the performance of the superstar by leaving them alone can be the very factor that drives the high performer away.

No one likes to feel that they have been taken for granted. The manager may be thinking “Gee, Joe (or Jill) is great. I need to leave them alone and focus on Jim and Sally. They need coaching and help.” There is a delicate balance of attention versus ignoring. Yes, you never want to interrupt the high achiever’s great work by constantly bugging them. By the same token, you shouldn’t take them for granted just because the work they do is superior to many others.

Don’t let the superstars feel under-appreciated. Find new and creative ways to acknowledge their work and the value of their contributions to your team’s (and your) success. Share the glory!