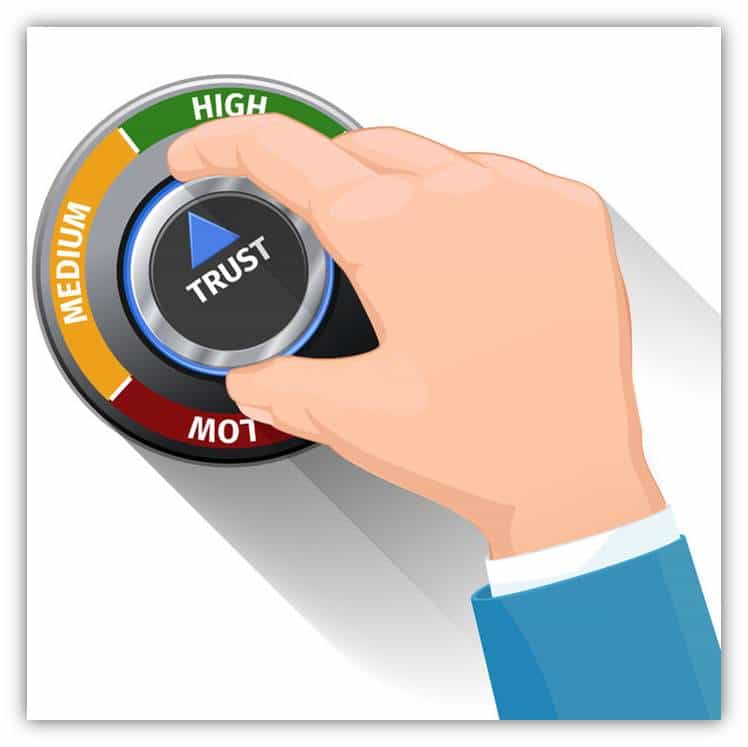 You and I share many different things. As leaders we share common needs, goals, and attributes. Depending on who you talk to, you and I score at different levels depending on the topic we choose to ask about. However, there is one key area frequently cited as a critical factor in determining whether a leader is effective or not. That factor is TRUST.

Business leaders don’t consciously go about their day specifically trying to build trust. This would be like having ‘building trust’ on your to-do list. Let’s see, go to the bank, check; wash the car, check; build trust, wait, what? No, that’s silly.

They will let their decisions and their actions impact the level of trust bestowed on them by others. Age old wisdom says trust is earned. Children are taught that at early ages. Leaders know that too.

Anyone who has ever assumed management duties understands how critical trust can be in persuading a team to perform. The collective efforts of the team can be hurt if individuals on that team have doubts about the boss.

Experts found that trust, social connectivity and a general sense of well-being are all intertwined. There are scientific studies revealing that two sections of the brain involved in sensing trust.

Based on perceptions of trust, the participants (in the study) reported positive interactions with the “close friend” to be more rewarding than interactions with a stranger—and were more likely to interact with this player. This illustrates our innate human desire to connect with others and create close-knit bonds even if these ties are based on blind trust or lead to [other bad outcomes].

Brain imaging of the participants showed that two specific brain regions were actively engaged when someone thought they were trusting a close friend. Increased activity of the ventral striatum and medial prefrontal cortex were correlated with positive social value signals when participants made decisions based on a belief they were playing with a good friend.

But science aside, what makes trust so hard to build? Think about all of your own experience with friends, co-workers, bosses, and leaders. You likely watched three levels of interaction that factored into how deeply you felt you could trust the other person.

In a work setting, the team leader must demonstrate a certain level of technical ability to begin earning trust from the team. New, first time managers struggle with this because they might have been promoted in recognition of their skills in one area, but they lack comprehensive knowledge of the whole team’s scope of responsibility.

Lacking that technical knowledge, they are deemed incapable of performing as team lead, so trust is denied.

New bosses moved in from outside the department suffer this same kind of gap. Until they can prove they know their stuff, the team will be reluctant to give the trust that might be needed for respecting the ‘new guy’.

I once was a department head of a large administrative group supporting a $5 billion asset portfolio at a large regional bank. I had several teams reporting to me, responsible for 5 different lines of business. One day, while walking through the department, one of the administrators stopped me and asked a fairly technical question. I paused and began coaching him on the topic, explaining the process and the calculations he needed for the problem he presented. He seemed shocked. I asked why? He said “I didn’t think the Big Dog would know this stuff.” To which I grinned and replied “How’d you think I got to be the Big Dog?”

The next level is what I will call cultural trust. After technical trust is established there is still a void at the cultural or corporate level. The key question here is whether you demonstrate consistent, reliable actions and behaviors.

No one can trust someone or something that acts inconsistently. Roger Ferguson, founder of ISI HR Consulting and creator of “Big Five Performance” talks about this corporate trust as whether a leader is known to be trustworthy, delivers as promised, and is generally known to be a person of character.

Being consistent in the way you act and interact creates a level of trust that grows with each passing day. As soon as you make a serious deviation from the pattern you start, trust takes a step backward. This is why it is so critical for leaders to be mindful of the direction they want to go, centered on core principles, and committed to consistent behavior as a leader.

This is the most intimate of trust levels. This is the deep, one-on-one trust. This kind of trust with individual employees has people thinking “I don’t care what others say, I know what I believe about this boss, and I am very good with it.” Further “I will follow them wherever they want me to go.”

Why would someone be willing to say that? Because the other two levels have been satisfied and now opportunities to deal personally with the person have proven to be reliable and solid. The pattern is there, the details are there, and, even more importantly, the experience is there.

This is why trust cannot be won overnight. It has to be earned. All three levels have to be engaged. You cannot make it to the gold ribbon level of personal trust without first achieving the other two levels.

Think about personal relationships. These same three levels are at work. Anyone who starts dating someone runs the same sequence of steps trying to test for trust. When you are the person wanting to earn someone’s trust, you have to be faithful to build these stages, carefully and thoughtfully.

More relationships crater over breakdowns in trust at one of these three levels. Repeated disappointment is the reason for eventual failure of any relationship.

We just don’t want to be around people we cannot trust. Certainly not for any meaningful reason.

For team leaders and executives at all levels, I teach a program called Team Trust. In it we explore ways that teams and their leaders can use a proven, reliable, and repeatable process to build trust, eliminate unneeded distractions, and improve performance.

There are core disciplines that can be deployed to improve team performance by building trust at all levels of the organization.